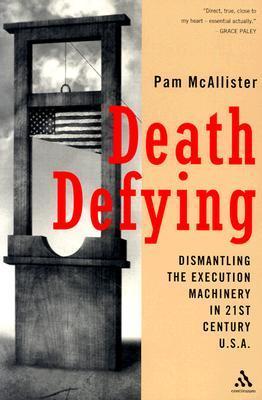 Pam McAllister’s Capital Punishment Quiz
(All answers and their fascinating contexts can be found in Death Defying.)

(1) Bible-readers who endorse capital punishment often quote Leviticus 24:17, “One who kills a human being shall be put to death.” Leviticus also orders death for which of the following?
a. cursing one’s parents
b. committing adultery
c. blaspheming the name of the Lord
d. all of the above

(2) According to Deuteronomy 21:18-21, what should a parent do to a rebellious son?
a. get counseling
b. forgive him
c. throw him a party
d. stone him to death

(3) Why do medical technicians swab a condemned person’s arm with alcohol before inserting the lethal injection IV?
a. because alcohol helps prevents, um... infection
b. no one knows

(4) In December, 1999, after Texas death row inmate David Long tried to commit suicide, prison officials saved his life by rushing him to a hospital. Why did they save his life?
a. because they were confused
b. because they felt bad about their jobs
c. because they had to execute him the next day

(5) After rejecting his request that the crime scene evidence be tested for his DNA, death row inmate Joseph O’Dell was informed by Virginia Attorney General Mary Sue Terry that, “Evidence of innocence is ________.”
a. essential
b. irrelevant

(6) In 1992, while he was campaigning for the presidency, Bill Clinton returned to Arkansas to oversee the execution of brain damaged Rickey Ray Rector. In addition to assisting his executioners in finding a good vein, what is the other memorable thing Rector did the night he was executed?
a. he read a book
b. he filled out an absentee voter ballot
c. he saved part of his “last meal” for later because he didn’t understand what was happening

(7) According to Judge Doug Shaver, of the Texas District Court, “The Constitution says that everyone’s entitled to an attorney of their choice, but the Constitution does not say that the lawyer has to be ________.”
a. a good dancer
b. awake
c. a genius
d. straight

(10) In 1903, an elephant named Topsy was executed at Coney Island after she killed an abusive handler. What two famous people got involved in her execution?
a. Wilbur and Orville Wright
b. Thomas Edison and George Westinghouse
c. Mark Twain and Helen Keller
d. Annie Oakley and Buffalo Bill

(A) 38 people of the Dakota Nation, tried without benefit of legal counsel, were hanged on the day after Christmas in 1862. This was the largest mass execution in the US.  In what state did this take place?
a. North Dakota
b. South Dakota
c. Minnesota
d. Utah

B) Who said, “It is the deed that teaches, not the name we give it. Murder and capital punishment are not opposites that cancel one another, but similars that breed their kind”?
a. George Bernard Shaw
b. Mario Cuomo
c. William Shakespeare
d. Martin Luther King, Jr.

Chapter 1 -- The Sad and Sordid History of Capital Punishment
* which crimes fit this punishment?
* the global shift away from capital punishment
* crimes of the famously executed
* not for humans only
* waiting: life on the edge of the abyss
* methods of execution — from the cross to the syringe

Chapter 4 --  Facing Complicated Truths
* revenge: it may feel good in the moment, but there’s hell to pay the next day
* capital punishment impacts those who impose it
* people can change

Chapter 5 --  Varieties of Nonviolent Action toward the Abolition of Capital Punishment
I — nonviolent protest and persuasion
II — nonviolent noncooperation
III — nonviolent intervention: actions that disrupt business as usual
IV — building the new society, one paper clip at a time
V — organizing in the religious context
some good news for activists